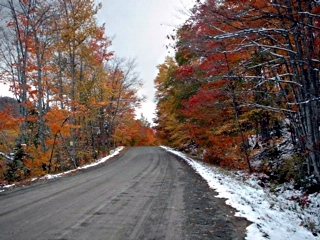 The only town in the state to have derived its name from the Civil War.

For Vermont the Civil War was almost a holy war. Nearly to a man, Vermonters were abolitionist, so much so that, when the state of Georgia got tired of hearing their memorials to the US Congress on the subject, that state made a suggestion to President Pierce: hire a crew of ditch-diggers to make a ditch all around Vermont and then float “the thing” out into the Atlantic Ocean.

Almost 35,000 Vermonters fought in the Civil War (considerably more than 10 percent of the entire population of the state) and two out of every seven men who served were killed in battle or died as a result of their service. The state’s town histories are filled with stories of the men who fought in the war.

One of the most acclaimed veterans returned from the Civil War was General George Stannard, who was called the Hero of Gettysburg by his fe!low Vermonters. Most military historians give General Stannard and his Vermonters credit for having achieved one of the key victories of the war when they first broke Pickett’s charge and then later repulsed the attack by Florida and Alabama troops at the Battle of Gettysburg.

George Stannard was born in in Georgia, Vermont, where there had been Stannards since that town was organized. He had later moved to St. Albans where he was a member of what now would be called a National Guard unit. He was a 41 year-old lieutenant colonel at the time the Vermont Regiment was mustered into service in 1861, and was promoted rapidly to a regimental command, which he held at Gettysburg. His contemporaries considered him to have been a man of considerable military skill, even though he had no military education as such. General Stannard served throughout the war, and was mustered out with the rest of his last command, the 16th Vermont Regiment, as a brigadier general at the end of the war.

Vermont legislative journals show that in 1865 the state commended General Stannard for his “skill and bravery.” Three years later he was named a member of the Vermont delegation to the National Republican Convention. As a mark of respect for his contribution to the Union cause, General Stannard was made doorkeeper of the US House of Representatives in 1881, and he held that position until his death in 1886.

Finally heeding the pleas of its residents, the legislature decided to give what had been known as Goshen Gore Number 1 independent status as a town. The new town was named Stannard in the General’s honor.

Goings-on in and near Stannard
Calendar of Events provided by the Vermont Department of Tourism & Marketing.