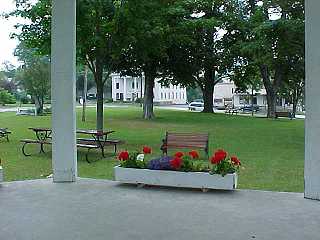 Considerable mythology exists about the naming of Danville. The story most often repeated (started in Hemenway’s Gazetteerand picked up by various writers and even some recent guidebooks) links it to “a distinguished French Admiral D’Anville”, except that no such person existed. The Reverend Mr. Goodwillie says it is for a son of Jonathan Arnold (founder of St. Johnsbury), which son also did not exist. Other writers have ascribed it to various other Frenchmen.

In fact, the name was suggested by a friend of Ethan Allen’s, Michel Guillaume St. Jean de Crèvecouer, to honor another Frenchman, Jean Baptiste Bourguignon d’Anville, who had been France’s royal cartographer for more than 60 years, and who is considered to have singlehandedly done more to change mapmaking than any man who ever lived. Correspondence between Allen and de Crèvecouer about names for Vermont towns is a matter of record. Under the pseudonym J. Hector St. John, de Crèvecouer wrote one of the best known titles in early Americana, Letters From an American Farmer (1782). It is for de Crèvecouer that St. Johnsbury was named.

Goings-on in and near Danville
Calendar of Events provided by the Vermont Department of Tourism & Marketing.

Covered Bridge (With Google Maps and satellite images):
Greenbanks Hollow
Click Here for a map of all bridges in Caledonia County.