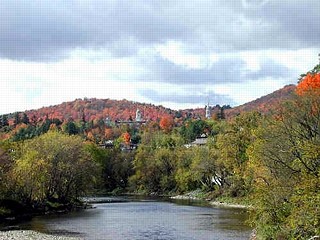 St. Johnsbury was settled by Jonathan Arnold, a Rhode Island native. He built the first frame dwelling in 1787, on a spot at the north end of Main Street now known as Arnold Park.

In 1790 the town was officially organized, and given its name at the first town meeting. Colonel Ethan Allen suggested the name St. John as a tribute to Hector St. Jean de Crèvecoeur, French Consul, experimental farmer and writer who was considered a powerful friend of young America.

De Crèvecoeur himself suggested that, because there were already many places called St. John, this one might be given the name of St. Johnsbury. The town would thus be unique, as there was no other St. Johnsbury in the world, a distinction which remains today.

Due to its rapid growth, St. Johnsbury became the County Seat by 1856. It also became a rail and highway junction, as well as industrial, commercial and cultural crossroads of the region, a position in which it is firmly secure today.

Goings-on in and near St. Johnsbury
Calendar of Events provided by the Vermont Department of Tourism & Marketing.

Catamount Film and Arts Company
presenting a variety of music, theater and dance events. Children’s events, artists and films are also presented, primarily in the St.Johnsbury and Lyndonville area.

Court House Park
A quiet green on the corner of Eastern Avenue & Main Street. The statue on the green was sculpted in Italy in 1868 by a sculptor from Brattleboro.

Fairbanks Museum & Planetarium
For over a hundred years, the Fairbanks Museum and Planetarium has been a source of discovery, delight, and knowledge and is the cornerstone of the Historic District. The building is a masterpiece of Victorian architecture, with towers, arches, and carvings of limestone and red sandstone. Inside you’ll find warm, inviting galleries filled with a dazzling array of the world’s wonders.Take a trip to the stars in Vermont’s only public planetarium, or watch weather in the making at the Northern New England Weather Center. With the largest natural science collections in northern New England and a rich selection of artifacts from around the globe, the Fairbanks Museum and Planetarium can be your window on the world.

St. Johnsbury Athenaeum
The ornate public library was built in 1871. With the addition of the Art Gallery in 1873, the Athenaeum is the oldest art gallery in the US maintained in its original condition. The collection has 100 works of art, including 19th century American and European paintings and sculpture.

St. Johnsbury Historic District
After Thaddeus Fairbanks invented the platform scale in 1830, his family donated many of the town’s public institutions in a unique effort to provide cultural amenities for workers in the factory. In the late 19th century, the community became a railroad center. The historic district includes commercial blocks, museums, a railroad station, and a number of Italianate residential buildings.