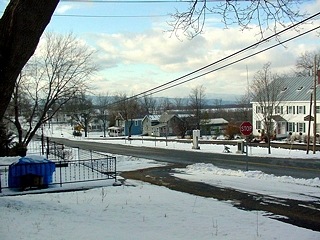 Shoreham was granted the day before neighboring Bridport and to many of the same men, one of whom was Colonel Ephraim Doolittle. The Colonel was a Connecticut man who had served under General Amherst during the French and Indian wars, and had taken part in the British capture of Fort Ticonderoga, which is across Lake Champlain just south of Shoreham. He had also worked on the construction of the Crown Point Military Road from what is now Charlestown, New Hampshire to Crown Point (across Lake Champlain from Bridport) in 1759, much of which road survives as today’s Route 103. Apparently Colonel Doolittle was very much impressed with the fertile and rolling lands along Lake Champlain.

Many of the men who are named in the Shoreham and Bridport grants had served with Colonel Doolittle in Vermont, so they, too, knew what kind of land they were getting. The last of the French and Indian wars delayed their making a settlement, but in 1766 a group of them broke ground for their first crops near what is now known as Mutton Hill. Child’s Gazetteer of Addison County in 1882 mentions that these settlers lived for a time according to the “Moravian Plan,” holding all property in common and sharing equally in the work.

It has been said that the name of Shoreham is derived from the town’s shore location on Lake Champlain. A more probable explanation is that it was named for the English town of Shoreham-by-the-Sea, about halfway between Bristol and Portsmouth on the English Channel, in Benning Wentworth’s time especially noted as a boat-building center. In many of the earliest records for Vermont’s Shoreham the name is spelled Shorum, reflecting what is still the locally accepted pronunciation.

Goings-on in and near Shoreham
Calendar of Events provided by the Vermont Department of Tourism & Marketing.

Covered Bridge (With Google Maps and satellite images):
Rutland Railroad
Click Here for a map of all bridges in Addison County.