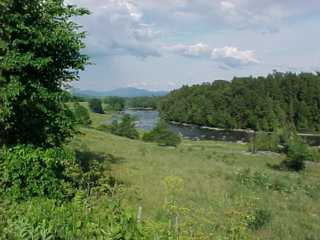 Sheldon was originally named Hungerford for the chief grantee, Samuel Hungerford, a Connecticut resident. Sometime after the town was granted, a man named Field bought Hungerford’s interest, and also acquired some of the other grantees’ shares in the town. He in turn sold to Colonel Elisha Sheldon of Salisbury, Connecticut, a veteran of one of the Connecticut line regiments during the Revolutionary War.

About 1789 Colonel Sheldon and his sons, Elisha Jr., George and Samuel, moved to Vermont. Other settlers soon followed and the town’s name was changed from Hungerford to Sheldon in 1792. Colonel Sheldon and Elisha Jr. were elected selectmen at the first town meeting, and Samuel was elected town clerk. Later Samuel was to become the town’s first justice of the peace and first representative to the Vermont legislature.

The records of the Governor and Council show that in October 1794 Samuel Sheldon petitioned that body for help in getting out of a mess. He had built a gristmill and sawmill on Black Creek and, as his petition stated, “the dam had flowed more ground than was expected,” with the result that Samuel was faced with suits for damages on every hand. He asked that the Governor and Council appoint a committee to assess the damage and determine how much he should pay. Apparently the committee managed to settle the affair to the satisfaction of everyone concerned, because Samuel lived out his life in Sheldon, as a much respected and loved town father.

A railroad stop named Olmstead Falls became known for the recuperative powers of “the waters” of what were known as the Missisquoi Springs in that part of town. In 1884, Olmstead Falls became Sheldon Springs in a move probably designed to draw attention to the town as a resort area. After the largest hotel in town was destroyed by fire (set by a disgruntled employee) the village declined as a tourist spot, but the name remains.

Goings-on in and near Sheldon
Calendar of Events provided by the Vermont Department of Tourism & Marketing.