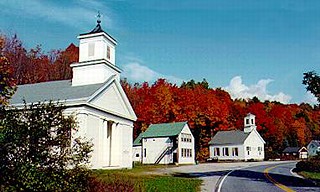 Chartered during the last year of the Revolutionary War, but it was not settled for almost twenty years.

In the charter the town’s name was given as Riptown, and many stories are told about that spelling. About 1859, Samuel Damon, the Ripton town wit and historian, told one version: “It has its present size obtained by ripping from other towns.” Although Ripton did get some land from surrounding towns, Damon’s story is not the origin of the town’s name. Very soon after the town was settled the w was dropped.

Ripton’s name actually comes from Connecticut, relating to the first-named grantee. In 1717 the community of Stratford, Connecticut, was divided in much the same way that some Vermont towns later were. That is, into two parishes. In Connecticut the term “society” was used instead of “parish”” so the northern half of Stratford, Connecticut, became known as Ripton Society, while the southern half retained its original name of Stratford First Society. (Side note: 70 years later the Ripton Society was incorporated as the town of Huntington, and early in the 20th Century changed its name to Shelton.)

The Revolutionary War roster for Connecticut shows that Abel Thompson, the first named grantee of Ripton in Vermont, gave Ripton Society, Connecticut, as his birthplace when he enlisted in the army. Several other grantees, including the De Forest family, are known to have been living in Ripton Society when they petitioned Vermont for land. In Connecticut it is thought that the Ripton Society took its name from Ripton in Huntingdonshire, England.

While it is not a village, Bread Loaf is one of the best-known post offices in Vermont. It was first established in 1872 to serve the Bread Loaf Inn, built by Colonel Joseph Battell, a wealthy philanthropist with a wide range of interests. On his farm in Weybridge, he bred Morgan horses, and with publication of his The Morgan Horse and Register in 1894, he founded The American Morgan Register. He later gave his farm to the United States government to continue breeding Morgans; the facility is now operated by the University of Vermont. During his lifetime Colonel Battell bought mountains – some of the most beautiful ones – in fourteen towns, and gave them to the people of Vermont to be held in trust by Middlebury College. He hated the automobile as much as he loved his horses and mountains, so guests at the inn were transported solely by horse-drawn vehicles. Currently the Bread Loaf post office operates as a summer branch of the Middlebury post office. It serves the internationally famous Breadloaf Writers’ Conference and the Middlebury College summer school.

The poet Robert Frost lived for many years in Ripton, and was instrumental in establishing the Breadloaf Writer’s Conference. In 1953, the Vermont Legislature named Robert Frost Mountain, in the northwestern part of town, in his honor.

Goings-on in and near Ripton
Calendar of Events provided by the Vermont Department of Tourism & Marketing.