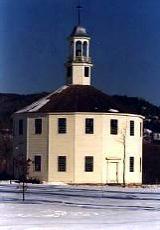 Richmond was created from lands in what had been three contiguous towns (Jericho, Williston and Huntington); a piece of a fourth (Bolton) was added later. How a new town came to be created from some of the best land in four others is buried deep in petitions and laws of the young state. The whole thing has the distinct odor of politics, with the Allens, the Chittendens and other members of the Onion River Company involved. How the name was chosen is not known, though we can reasonably rule out honoring royalty.

Richmond Center has always been the chief village, though Jonesville, to the south on Route 2, was a close second for a number of years. Ransome Jones was a prominent village merchant in the 1880’s.

Fays Corners, on the road to Hinesburg, received a post office in 1890. Truman Fay’s widow, Salome, was the one and only postmistress, the office folding two years later for lack of business. The chief business in that area was the Fay family’s wool-carding and cloth dying mill, but that was defunct by 1900.

Goings-on in and near Richmond
Calendar of Events provided by the Vermont Department of Tourism & Marketing.

The Old Round Church
16-sided church (pictured above) said to be the first community church in the country, built in 1812-13 by a group of five denominations and used by each as a place of worship for many years. Lore has it that it was built “round” so there would be “no corners for Satan to hide in.” Henry Ford once tried to buy it for removal to Dearborn, Michigan, but the townspeople refused the offer.

Original Slide of river rafting in Richmond VA, as a CSX train passes above, '96