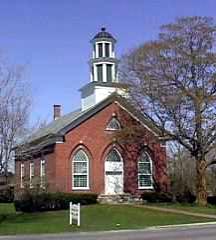 Williston was one of ten towns granted on the same day to many of the same people, named for Samuel Willis, a wealthy Quaker from Long Island and the first grantee named. While Willis was named on several of the other town grants, this one was clearly the best of the group: it offered acres upon acres of already clear, tillable farmland along the Winooski River.

Thomas Chittenden, Vermont’s first governor and for whom the county is named, is credited with being the first to settle in Williston, though he submerged the family’s heavier belongings in the duck pond and headed for Arlington during the Revolution.

With the coming of the Central Vermont Railroad, the smaller village of North Williston became a focal point, in 1876 the site of the first cold storage plant in New England. Tons of meat, poultry, butter and eggs could be stored here before being shipped to the New York and Boston markets.

In the 1970s, Williston was the center of controversy in the county, as the proposed site of a large shopping mall near the junction of Routes 2 and 2A; “Don’t Mall Williston” was the bumper sticker seen on opponents’ cars. After years of legal wrangling, the project was eventually squashed.

Today, in its place, an even larger sprawl of separate “big box” superstores is just across the road from where the mall was to have gone. A modified version of the original mall, with a much more attractive “town center” feel to it now occupies the original site. Despite past and present opposition focused on the effect such development would have on local businesses, Wal-Mart, Home Depot, Best Buy, Toys “R” Us and the like can be found all huddled together just off I-89 at Exit 12. Of course, what is easily the busiest retail district in the state requires additional infrastructure maintenance: Williston is one of four municipalities in the state with a 1% local option sales tax (the others being Burlington, Manchester and Stratton).

Goings-on in and near Williston
Calendar of Events provided by the Vermont Department of Tourism & Marketing.