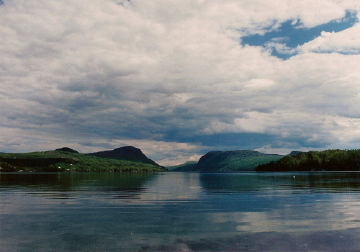 Originally named Westford, which confused everyone, becuase there had been a Westford in Chittenden County since Benning Wentworth granted it in 1763. Nobody has ever been able to come up with any explanation as to why the duplicate name was used in the first place, nor why it took six years for the error to be corrected by changing the name to Westmore. Not that Westmore was considered much of an improvement: in addition to the original Westford and the now Westmore, there are seven other towns with West in their names, not to mention an assortment of villages within various towns (e.g., Westminster West, which rightfully would be West Westminster, but you get the picture).

Hilly, even mountainous, Westmore never attracted many settlers, 1880 being the big census year with 485 residents. Today, the town is most noted for the presence of Lake Willoughby (pictured above).

Goings-on in and near Westmore
Calendar of Events provided by the Vermont Department of Tourism & Marketing.