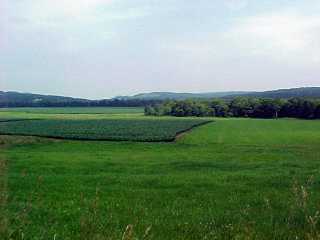 The first named grantee was Commodore Abraham Whipple of Rhode Island, and it was he who named the town Navy.

Commodore Whipple was descended from John Whipple, one of the original proprietors of the Providence (Rhode Island) Plantations, and was married to a sister of the famed Hopkins brothers, Esek and Stephen. The former was commander-in-chief of the Continental navy from 1775-77, and the latter was a long time governor of Rhode Island and chief proponent of colonial home rule in his newspaper, Providence Gazette.

He had followed the sea from a very early age, and was considered to be the best seaman in his colony. During the French and Indian War he commanded the privateer Game Cock, which captured twenty-three French vessels in 1759-60. In 1772 he led the party that burned the British revenue cutter Gaspee in an exploit considered by many historians to have been the first overt act of the Revolutionary War. During the early days of the war, Whipple was first put in command of Rhode Island’s navy, then was breveted as commodore of a Continental squadron. In 1779 he captured eight East Indiamen that were later sold in Boston for over one million pounds, the richest bounty of the whole war. Some of his share of the prize money probably paid for his Vermont town.

In late 1779 Whipple was sent to take charge of the naval defense of the already doomed and heavily besieged city of Charleston, South Carolina. He was captured by the British when General Clinton took the city on 12 May 1780, and for the rest of the war he was on parole at Chester, Pennsylvania. Apparently life in Rhode Island was too tame for him after the war, because about 1785 he migrated to Ohio, where he died in 1819. As late as 1801 he was making commercial voyages down the Mississippi River to New Orleans and Havana, but there is no record that he ever visited his Vermont town.

In 1825 the town’s name was changed by the Vermont legislature from Navy to Charleston. Most writers have assumed that the new name was after Charlestown in either Massachusetts or New Hampshire, but it seems much more probable that it was in honor of Commodore Whipple’s historic defense of Charleston, South Carolina, during the Revolution.

Goings-on in and near Charleston
Calendar of Events provided by the Vermont Department of Tourism & Marketing.

NorthWoods Stewardship Center
A non-profit education organization working with over 9,000 school children annually, with over 2,000 folks taking part in our seasonal community outreach programs. We maintain 30 km of skiing and hiking trails and hire 60 youths each summer as part of our Northeast Kingdom Conservation Service Corps. We also host an ecological research team. 802-723-6551.