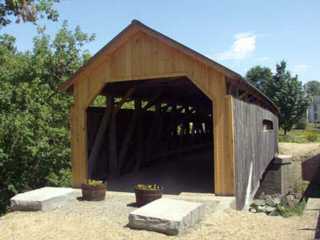 Absent any evidence otherwise, the name appears to derive from being the most westerly of four granted the same day. For whatever reason, in 1781 the young Republic of Vermont granted another Westford, in Orleans County. That town was subsequently renamed Westmore.

Westford and adjacent Underhill listed many of the same grantees, which accounts for the fact that the names of families residing in one contributed to places names in the other. Mount Macomber in Underhill, for instance, derives from the Macomber family of Westford.

Where family names and descriptive terms were usually the basis for place names, Westford has a distinction in Number Eleven Hill. Nowhere else in the state is anything named by a number. When the town was being laid out, land was distributed in rounds, somewhat like modern sports drafts. The best land (suitable for dwellings and tillage) went in Round One to the most prominent grantee. Pasture land was Round Two; Round Three was frequently woodlot. Round Eleven would have been pretty far down the list in terms of usefulness.

Goings-on in and near Westford
Calendar of Events provided by the Vermont Department of Tourism & Marketing.

Covered Bridge (With Google Maps and satellite images):
Brown’s River
Click Here for a map of all bridges in Chittenden County.