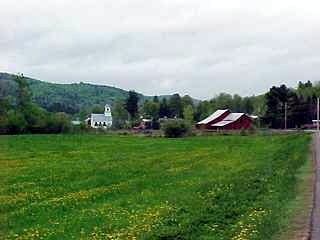 Undoubtedly named for the home town of many of the grantees: Braintree, Massachusetts, named in turn for Braintree, Essex, England.

The village of East Braintree was called Snowsville for a time, after Jeremiah Snow, who arrived in the town about 1812. Local tradition has it that he had been a sailor, but had experienced a religious conversion, gave up the sea and became a landsman and lay preacher. He was said never to accept money for preaching, dressing as a sailor while doing so because that’s what he was wearing when he was converted.

Snow built a gristmill and sawmill at East Braintree; expecting the main stage line from Boston to Burlington would pass through the village, other businesses began to congregate around the mills and the village grew. The stage went elsewhere, and the village went into decline. Snow and his wife were penniless when they died in their eighties. There remains, however, evidence of the village’s former name: the Snowsville General Store smack in the center of the village.

Goings-on in and near Braintree
Calendar of Events provided by the Vermont Department of Tourism & Marketing.