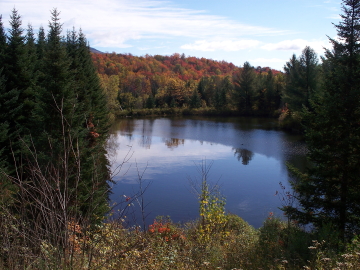 One of several Vermont parcels granted to New York City lawyer John Kelly, spelled Belvedere in the grant. Kelly was a land speculator on a grand scale, but more popular than many of his New York counterparts. After the Revolution, he worked closely with William Johnson (for whom the neighboring town of Johnson is named) in the effort to get Vermont admitted to the Union.

Kelly, being quite Irish, is believed to have named this town for Lake Belvedere, one of the most beautiful bodies of water in Ireland. The word itself is a translation from Italian for “beautiful view”; in Kelly’s time, as now, the word was also a common noun for a small or open summer house from which to enjoy the scenery.

Goings-on in and near Belvidere
Calendar of Events provided by the Vermont Department of Tourism & Marketing.

Covered Bridges (With Google Maps and satellite images):
Mill Morgan
Click Here for a map of all bridges in Lamoille County.