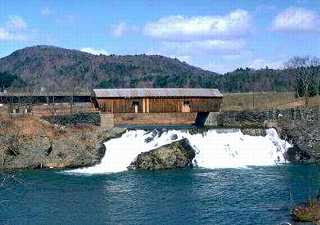 Originally named Hertford; a confirming Patent was issued by New York in 1766 under the same name.

It wasn’t until 1782 that the Vermont Legislature changed the named to Hartland, because, as it was noted, Hertford and Hartford being adjoining, it was “difficult for strangers to distinguish which of said towns might be meant . . . and many other inconveniences do attend the having two towns so near of one name in the state.” Did that fix the problem? Not quite. Many still find the similarity of names confusing.

Goings-on in and near Hartland
Calendar of Events provided by the Vermont Department of Tourism & Marketing.

Covered Bridges (With Google Maps and satellite images):
Martins Mill Willard
Click Here for a map of all bridges in Windsor County.