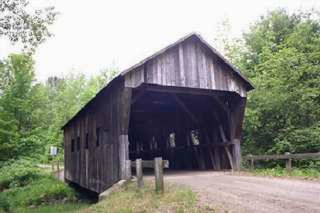 Many of the grantees lived around New Haven, Connecticut, so the town’s name probably derives from Wethersfield, one of the smaller communities in that area. Originally the name of the Vermont town was spelled the same way as is in England and Connecticut, but the “a” slipped into the Vermont spelling very early.

The Connecticut town was named in 1637 for Wethersfield, Essex, England, where the name originally referred to a field associated with a wether (from the Old English wither), or castrated ram. Wethers often were trained to lead a fiock of ewes to and from pasture. When the Vermonters put the “a” into their town’s name, they lost its old pastoral meaning, which would have been appropriate in view of the sheep boom that later made Weathersfield one of the most prosperous towns in the state.

At some point it occurred to someone that Corners lay in the shadow of Mount Ascutney, so in 1851 the name of the post office was changed to Ascutneyville. In 1924, during one of Washington’s periods of trying to tidy up postal names, the -villewas dropped, and the village has been Ascutney ever since. Ascutney is a very old Abnaki name for the mountain, possibly meaning a place “at the end of the river fork.” Although Weathersfield has the village of Ascutney and Little Ascutney Mountain, the main peak of Mount Ascutney is over the line in the towns of Windsor and West Windsor.

Goings-on in and near Weathersfield
Calendar of Events provided by the Vermont Department of Tourism & Marketing.

Covered Bridges (With Google Maps and satellite images):
Downers Salmond
Click Here for a map of all bridges in Windsor County.