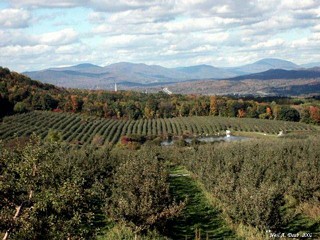 The first town granted in what were to be known as the New Hampshire Grants, later as Vermont. Benning Wentworth had been Royal Governor of New Hampshire for nine years when he issued the grant to himself and several friends, neighbors and relatives. Whether he had his mind on immortalizing himself or honoring his mother (Mary Benning) in naming the town, one can only guess.

Settlement of the town was delayed until 1761 by the last French and Indian War, and was barely underway when the settlers became involved in their long title dispute with New York. The controversy was at its height when the Revolutionary War began (because the “Yorkers” were primarily Tory in sympathy) and Bennington was at the center of it (because New York’s most bitter enemies, the Green Mountain Boys, chose to make their headquarters there).

In August, 1777, the area was the site of one of the most important battle of the Revolution. Even though the actual engagement was fought in New York, it will always be known as the Battle of Bennington.

Goings-on in and near Bennington
Calendar of Events provided by the Vermont Department of Tourism & Marketing.

Covered Bridges (With Google Maps and satellite images):
Henry Paper Mill Silk
Click Here for a map of all bridges in Bennington County.