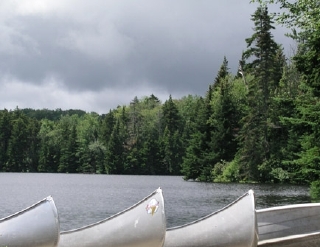 Woodford was originally granted on March 6, 1753, but due to the French and Indian Wars was not settled within the required five years and was re-granted August 12, 1762. It was supposedly named for a General Woodford, a British officer who gave service during the French and Indian Wars. However, the first Woodford connected with the American military shows up later: a Virginian who fought in the Revolution. He is not known to have had any military career prior to the second grant. The name is more likely after Woodford, Essex, England.

Woodford contains some 14,000 acres of the Green Mountain National Forest, and is almost entirely mountainous except for a short stretch along Waloomsac Brook.

The village of Woodford has long been known unofficially as “Woodford City”: a derogatory term when used by its detractors, but something else entirely when used by its supporters, who cite Matthew 5:14, when Jesus said, “A city on a hill cannot be hidden”; it is the highest-altitude village in the state. The brook flowing through the village is known as City Stream.

Goings-on in and near Woodford
Calendar of Events provided by the Vermont Department of Tourism & Marketing.