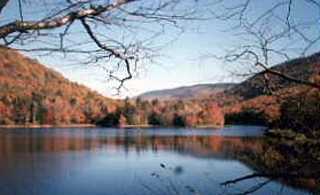 Named Searsburgh in the charter, the final h dropped through custom.

The town was created from the northern part of Readsboro, though it is not at all clear why. There were no residents in that part of Readsboro at the time, and some twenty years passed before anyone settled there.

Equally unclear is why the town was named as it was. One possibility is Isaac Sears, a New York City merchant and ship owner who seized the New York Arsenal and Customs House upon hearing of the battles at Lexington and Concord, and whose vessels preyed on British shipping during the Revolutionary War. His name is found on several Vermont town charters, but this one is not among them; the Legislature could have been seeking to honor Sears in this manner.

With only nine residents in the 1820 Census, the population grew to over 200 over the next fifty years, but has declined ever since. The town contains over a dozen mountains of over 2,000 feet, none of which are identified by name.

Goings-on in and near Searsburg
Calendar of Events provided by the Vermont Department of Tourism & Marketing.