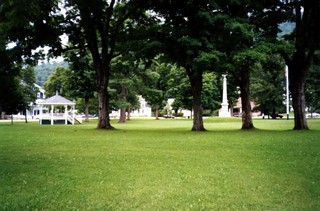 It is generally thought that the name derives from Rochester in Massachusetts, because many Vermonters had come from that area. The Massachusetts town was named by Governor Samuel Shute for his friend Laurence Hyde, the first Earl of Rochester, who was a brother-in-law of King James II and a son of the Earl of Clarendon. During the troubled years after the restoration of the English monarchy in 1660, the Earl of Rochester held many positions of trust and was considered to have been a statesman of great eminence. The Earl took his title from the old Roman town of Rochester in Kent. The Romans called a camp or fortified place castra, which became the English “Chester,” as in Rochester, Manchester, etc.

Strangers are always interested to find the names of Michigan and Texas connected with localities in Rochester. John C. Huden felt certain they were Indian names, Texas meaning “friend or ally,” and Michigan, meaning “a big lake.” However, since both names came into use in the I9th Century, it is possible that they originated in joking references to the distant states with those names, suggesting that the areas so named in Rochester were remote from settled villages in town.

Equally fascinating are the areas known as Jerusalem and Breakneck. According to local folklore, the first name was given because the people in Jerusalem were so pious. The landscape at Breakneck was so steep that a young lady and her lively horse once fell over a precipice and both suffered broken necks.

When the ill-starred town of Philadelphia was divided up among its neighbors, Rochester and Goshen got Philadelphia Peak, a 3,168-foot-high giant that sits astride their mutual boundary. The name of the mountain is the only thing left as a reminder that Vermont once had a town named to honor the birthplace of the US Constitution.

Goings-on in and near Rochester
Calendar of Events provided by the Vermont Department of Tourism & Marketing.