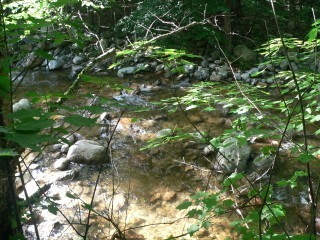 The 1753 date, for the first grant of Stamford, makes this one of the oldest of the New Hampshire Grants. The outbreak of the last of the French and Indian wars kept the grantees from making a settlement within the required amount of time, so Wentworth renewed their grant in 1761, saying: “The grantees have represented that by the intervention of an indian war since making the said grant, it has been impracticable to comply with and fulfill the conditions … we, being willing to promote the end proposed, have of our further grace and favour suspended our claim to the forefeiture which the said grantees may have incurred, and do grant unto the said grantees … the term of one year for performing and fulfilling the conditions …”

Apparently the grantees still couldn’t find anyone who would make a settlement in Stamford, so two and a half years later Wentworth made a new grant for the town as New Stamford. Some of the original 1753 grantees were named in the 1764 grant, but there also were some new people. The town’s name was apparently changed to New Stamford because Wentworth wanted to have it understood that this was an entirely new grant. It seems that New Stamford didn’t particularly appeal to the people who finally settled the town, because in 1783 they voted “to do business in the name of Stamford, alias New Stamford.”

There never has been any certainty about the origin of the Stamford name. Some place-name aficionados suggest that it derives from the Connecticut town of the same name, which was named in 1642 for Stamford in Lincolnshire, England. The name originally meant “a stony ford.” Others have suggested that Stamford in Vermont was named for George Grey, the fifth Earl of Stamford. However, though George certainly was the most distinguished of the Earls of Stamford (and he did marry Henrietta Cavendish-Bentinck, who was related to Wentworth), he did not succeed to the Earldom until 1768.

At the time Wentworth first used the Stamford name for the town, another Grey, Harry (1715-68), was thirty-eight years old, and had succeedeed his father as the fourth Earl of Stamford a few years earlier. He was a grandson of the seventh Lord Dudley, and was married to the only daughter of the second Earl of Warrington. With those connections, Harry Grey probably looked as though he might be a good man to have in back of Wentworth, and the latter could not have foreseen that this particular Earl of Stamford would turn out to be a political and social nonentity.

Goings-on in and near Stamford
Calendar of Events provided by the Vermont Department of Tourism & Marketing.