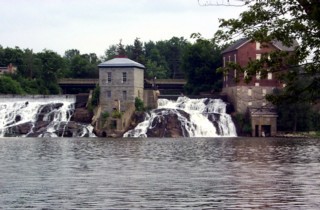 The only one of Vermont’s cities not to have been first chartered as a town or independant village. It is the smallest city in Vermont, and the third oldest in the US (only Hartford and New Haven, Connecticut are older).

It is named for Charles Gravier, Comte de Vergennes. Reluctant to to make any overt moves that might involve her in another war with England, France agreed to aid the colonists behind the scenes, principally through the considerable efforts of Benjamin Franklin. At the direction of Louis XVI, Gravier established a fictional company through which the Americans received nearly 80% of their military supplies. It was also Gravier who negotiated the 1783 Treaty of Paris that formally brought the Revolutionary War to a close.

Here, Thomas MacDonough built and armed the fleet that would defeat the British on Lake Champlain. The Monkton Iron Company (which was at the time the largest iron works in the colonies) manufactured the fittings for MacDonough’s fleet, as well as most of the cannon shot used by the army in the north. The ore used was mined in nearby Monkton.

Goings-on in and near Vergennes
Calendar of Events provided by the Vermont Department of Tourism & Marketing.