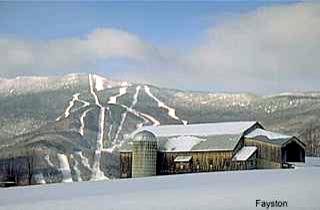 Until the rise in popularity of downhill skiing, the mountainous western half was valueless except for timber. There is no indication as to why such an insignificant (at the time) parcel was named for the Fays, a family which figured so prominently in the founding of the state, nor is there any indication as to what the family thought of having a town named for them. While they were among the grantees of several Vermont towns, they are not among those of Fayston.

Stephen (“Landlord”) Fay (formerly of Hardwick, Massachusetts) owned the Green Mountain (or Catamount) Tavern in Bennington, the headquarters of the Council of Safety and the Green Mountain Boys prior to the Revolution. Five of his seven sons fought at the Battle of Bennington, one of whom was the first man killed. Son Jonas was “the Boys'” doctor and sometime scribe. Son Joseph was Clerk of the Governor and the Council, negotiated with the Governor of Canada for a separate peace between Vermont and England, and represented Vermont at the first Continental Congress in its effort to be admitted to the Union.

One cannot help but wonder if Vermont’s Founding Fathers knew the origin of the name Fay: in Old French, “beech tree”, one of the surnames which migrated to England with or soon after William the Conqueror. The Green Mountain Boys were known to apply what they referred to as “the beech seal” (to whip with a beech switch) to Yorkers who tried to dispute the settlers’ right to Vermont lands under the Wentworth grants.

Goings-on in and near Fayston
Calendar of Events provided by the Vermont Department of Tourism & Marketing.