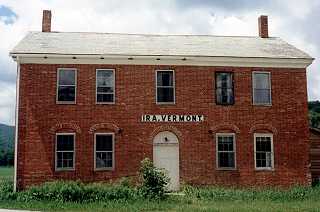 Ira is unique among Vermont civil entities: it just grew, and probably never had any official sanction for its existence. It is thought that the first settlers in Ira were, in fact, squatters -intentional or otherwise.

In 1780 a petition from 40 associates, including Ira Allen, for whom the town is named, asked the legislature for a grant of what they referred to as the “District of Ira.” Probably the grant was made, for the Governor and Council established the granting fee and set the date for its payment.

For the next ten years, Ira kept appearing on the agenda of the legislature and the Governor and Council because most of the grantees had not paid their shares of the fees. Committees were established to study the situation, reports were made; and still the fees were not paid. At one point the legislature voted to put the land rights of the delinquents up for sale. Apparently that was never done, or, if it was, nobody placed any bids, because there is no record of a vendue (forced public auction) for Ira. Eventually the whole affair petered out, and in 1790 the town was assessed its share of the $30,000 which the state had to pay New York for her claim to land in Vermont.

Hiram H. Huse, the still unsurpassed authority on the provenance of Vermont towns, summed up the matter in his “Notes Historical and Descriptive” for Volume XXVI of the New Hampshire State Papers: “There is no record that the granting fees were ever paid and probably no charter was ever issued.” One of the writers in Child’s Gazetteer for Rutland County stated that Ira was supposed to have been chartered by Benning Wentworth about 1761, and that the original charter was probably burned in the fire which destroyed the State House at Montpelier in January of 1857.

It is not known what interest Ira Allen had in the District of Ira, other than that he was the state’s Surveyor General, and therefore was in a position to know what land was not yet chartered in 1780. It is possible that the people living in Ira at that time had thought they were taking up land in one of the contiguous towns. If Ira Allen pointed out that they were on land which had not yet been granted, it would explain why they asked for the grant after they had already settled in it; it also would explain why Allen’s name was included in the petition for the grant, and why the town was named for him.

It is hard to believe that Ira Allen was personally much interested in the town, because it was not especially valuable land, having almost no tillable acreage. About that same time he requested and received grants for the towns of Irasburg and Alburgh. Both of those towns had much more promise, both were named for him, and he did concern himself with their settlement and subsequent development.

Goings-on in and near Ira
Calendar of Events provided by the Vermont Department of Tourism & Marketing.