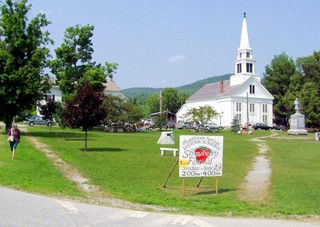 Middletown was created by taking acreage from Tinmouth, Wells, Poultney and Ira. Originally Middletown, changed to Middletown Springs in 1884.

In February 1784 fifty inhabitants from the particular sections of the four towns concerned petitioned the legislature to create a separate town, principally because “the mountains around them are so impracticable to pass it is with great trouble and difficulty that they can meet with the towns they belong to for public worship and town business.” A committee was appointed to confer with the petitioners and their surveyor, Joseph Spaulding. The report was favorable and the town was created. Spaulding was declared to have done the surveys so well that there never has been any fault found with any of the property lines or town boundaries.

Locally they say that Spaulding was allowed to choose the name for the new town because everyone was so pleased with his work. He had moved to Vermont from Middletown, Connecticut, and felt this name particularly well suited to this new town that had been carved out of the corners of four others, hence being in fact the “middle town”.

Long before the area was settled, natives and a few wilderness pioneers knew about the mineral springs on the bank of the Poultney River. Later, residents of the area found the water healthful and named the village after the springs. When the post office was established at the village in 1808, it was given just Middletown for a name, but in 1875 (during one of the Post Office Department’s periodic attempts to conform to local usage), it was renamed Middletown Springs; finally, in 1884, the legislature officially changed the name of the entire town to match that of the village.

The Springs at Middletown have had a bizarre history. In 1811 a great flood tore out the banks of the Poultney River and dug a new channel for the stream, burying the springs under tons of dirt. That seemed to be the end of the springs, but in 1868 another freak flood burst the new river channel, returned the stream to its original course, uncovering the springs again. As a result, the village became a popular health spa during the late l9th and early 20th centuries.

The only other village of any consequence was Burnham Hollow, which does not appear on modern maps. It grew up around the sawmill and forge of John Burnham (sometimes Burnam). The town history implies that he was one of the early settlers, stating that he already was an old man when the freshet of 1811 destroyed his businesses along with the springs.

Goings-on in and near Middletown Springs
Calendar of Events provided by the Vermont Department of Tourism & Marketing.