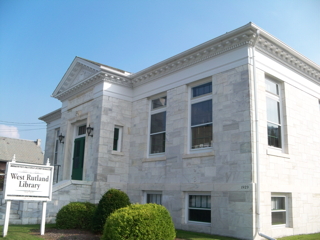 The name comes from the village of West Rutland, the only village in that portion of what was then still the town of Rutland.

In the 1830’s, it was discovered that West Hill was almost solid marble of very fine quality. The industry there was not profitable at first, but with the completion of the Rutland Railroad through the area in 1851, easy transportation became a reality and marble became the village’s chief business, with more than two dozen companies engaged in it over the next thirty years. By and large, it was the marble people who were most interested in West Rutland separating from Rutland, so it can easily be said that marble was the moving factor in the birth of the new town, as it had been for Proctor.

In a rare reversal of environmental trends, several acres of West Rutland actually became wetland as a result of industry. Waste from the marble plants (primarily the sand used in polishing) clogged a small stream and caused it to spread out, creating a viable marsh. Each spring, local students and others participate in a cleanup of debris along the roads through the area.

Goings-on in and near West Rutland
Calendar of Events provided by the Vermont Department of Tourism & Marketing.