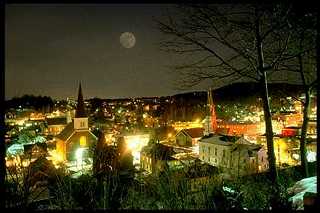 The town of Montpelier was granted to Colonel Jacob Davis in 1781, as was nearby Calais. Despite adjustments to pronunciation and spelling, his decision to name these two towns for places in France is likely a combination of factors: there was a general feeling of gratitude in the air toward the French for their assistance in the Revolution, and he was known to dislike the propensity of grantees for naming new Vermont towns after their former homes. Besides which, the young Republic itself bore a name that, while not genuinely good French, consisted of French components, and the mont in Vermont and Montpelier echo each other nicely.

Montpelier was selected as the capital of Vermont in 1805 after considerable squabbling among many towns; there had been no permanent capital since becoming a state 14 years earlier. For a time, the capital alternated from one side of the state to the other. In the end, Montpelier’s proximity to the geographic center of the state was a principal deciding factor.

After construction of the capitol building in what was then the village of Montpelier, village residents began to agitate for a separate identity. In 1848 the Legislature divided the original town in two: Montpelier and East Montpelier. The former got most of the people, the seat of state government and the choice river valley location; the latter got most of the land but little else. In 1895, the Town of Montpelier was further incorporated as a city.

Several branches of the Winooski River merge within the city limits, and Montpelier residents had no small part in the name by which we know it today. The river itself takes its name from the Abnaki Winooski (“the wild onion place”) and Winooskitook(literally “the wild onion river.”). French explorers had rendered it as Ouinousqui, which was the best they could do for what they would have heard as “Weenooskee”. For a time it was called “French River”.

In all of the New Hampshire Grants where the name was mentioned, the phrase “so-called” was inserted after Onion River, so it seems there was at least some uncertainty over what it should actually be named. When the Allens got to looking around for land, they didn’t want anyone reminded of the French and Indian troubles, so they opted for the Onion River name, and called their land corporation the Onion River Company.

By the middle of the 19th Century, Montpelier residents were fretting over the fact that their town was coming to be known as “Montpelier-on-the-Onion,” and started a campaign to re-establish the Winooski name. As a result, both Child’s and Beers’ maps of the 1880’S carried the legend “Winooski or Onion River.”

Goings-on in and near Montpelier
Calendar of Events provided by the Vermont Department of Tourism & Marketing.