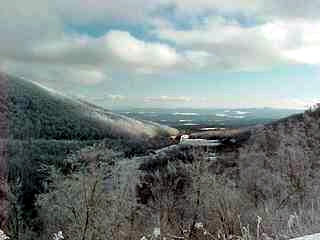 The town is unique in that it was established by two charters. The earlier (date used above), for 7,600 acres in the southern section to Governor Thomas Chittenden in lieu of back pay; the later (December 28, 1792) to the distinguished New York statesman John Jay, in appreciation for his help in settling the Vermont-New York land dispute, thus opening the door for Vermont to become the fourteenth state. The whole area had been granted in 1780 as Wyllis (after the principal grantee) but never chartered. For one reason or another (possibly because the town is mostly on the side of a mountain), the fees were never paid.

In 1783, the Republic, low on funds and owing the Governor his salary, decided to pay Chittenden with this land in what was now being called Carthage. Ira Allen would have to survey it, but with no money to pay him or his crew to do the work, Vermont told Allen he could have the rest of the land. Having had no success at selling the land, Allen paid his men out of his own pocket and asked for a meeting of the Governor and Council to resolve the matter. Without a quorum present, Chittenden gave Allen the charter for another forfeited town which had been called Woodbridge (now part of Westfield). Political opponents of Chittenden and Allen called it chicanery, leading to Chittenden’s defeat in the 1789 election. It was determined the following year that Chittenden had done nothing wrong, on top of which Vermont still owed Allen and Chittenden a considerable sum.

Wyllis/Carthage/Jay had gotten off to a rocky start, and it never really overcame the handicap. It was 1810 before the Census recorded any population, 1836 before there was a post office, which closed in 1905. The southwestern corner of the town is comprised of Jay Peak State Forest; Vermont’s northernmost ski resort, Jay Peak, is the principal activity in the town. A few small businesses are gathered near a crossroads on Route 242, the only location bearing any semblance to a village.

Goings-on in and near Jay
Calendar of Events provided by the Vermont Department of Tourism & Marketing.