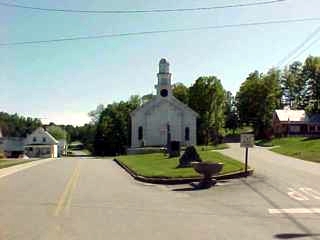 The story of the town is one of confusion and disappointment for its grantees.

The first named and chief grantee was Major Elias Buel (sometimes Buell) of Coventry, Connecticut, from whom Buels Gore in Chittenden County gets its name. Also listed among the grantees were five other Buels, including the Major’s son and Ira Allen. The grant stated that the town was to lie between Shoreham, Orwell, Hubbardton, Sudbury and Whiting in the southwestern part of the state. With Allen, the Surveyor General, involved in the grant, it seems hard to believe that the grantees really thought that the area had space enough for another town; but that was what they said, and the legislature wrote the grant.

Four years later the Major was back at the legislature, asking that his grant be considered a “flying grant” so he could go looking for ungranted lands against which his nearly worthless Coventry grant could be applied. He got permission, but by then it was not easy to find a 23,000-acre piece of good land anywhere in the state. Buel finally had to be content with getting three separate pieces in 1788. The largest was the present town of Coventry, the second was Buels Gore, located half the state away, and the third was Coventry Leg (or Gore), which was annexed to the town of Newport in 1816.

Buel had been one of the leading citizens in his home town of Coventry, Connecticut, where his father had been among the first settlers and from which the name of the Vermont town is taken. The Major was an officer with one of Connecticut’s militia companies that responded to the Lexington alarm in 1775. Sometime during the closing years of the Revolution he moved to Rutland, Vermont, and later to Buels Gore. He was elected to the legislature, served on the Council of Censors, and was a judge of the Chittenden County court. Eventually he lost all his Vermont lands for unpaid taxes and moved to New York state, where he died in 1824. It now seems that there may have been some flimflam worked against the Major: Ira Allen later bought all of his land at a sheriff’s auction for its tax value. It is rather sad that Major Buel’s dream of making a new home at another Coventry should have come to nothing.

Goings-on in and near Coventry
Calendar of Events provided by the Vermont Department of Tourism & Marketing.