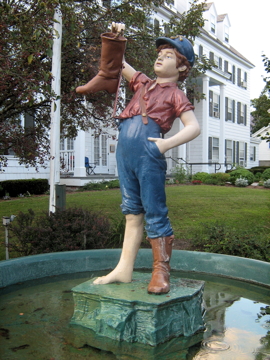 Named for Wallingford, Connecticut, the home town of Eliakim Hall, the first named grantee. The principal villages of Wallingford, South Wallingford and East Wallingford all owe much of their early prosperity to the railroads which passed through them.

Wallingford is unusual in Vermont in that almost all of its topographical features have descriptive names, rather than names derived from inviduals (Bear Mountain, White Rock Mountain, Granite Hill, etc.).

According to local lore, Sugar Hill is where maple syrup was first made in Vermont.

Goings-on in and near Wallingford
Calendar of Events provided by the Vermont Department of Tourism & Marketing.

Paul Harris House
The brick schoolhouse built by Harris’ grandfather, in which Harris received his early education. Harris grew up to become an attorney and founder of the business organization Rotary International. The Wallingford Rotary holds its meetings here.

The Boy With The Boot
was a gift to the Town of Wallingford in 1898, in memory of Arnold Hill, by his children. One of his sons, who lived in Chicago, had seen a similar statue there, and the siblings all agreed that such a statue would be a fitting memorial to their late father, who had been the owner of the Wallingford Inn from 1861-1871. It is presumed that damage of some sort (c1910) prompted him being stored away and seemingly forgotten until the Inn’s new owner found him in the attic in 1920. He was restored, and has occupied this same position in front of the Inn ever since (taken indoors during the winter to avoid weather damage). He has become enough of a local icon to have been adopted as the official logo of the town.

White Rocks Recreation Area
Picnic areas and hiking trails (part of The Long Trail) to either the top or bottom of the huge rock slide which dominates the eastern face of White Rock Mountain. Even in late summer, the cold air flowing down from the rocks is like entering an air-conditioned room.