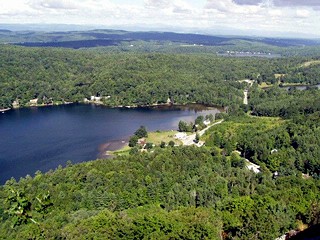 Hubbardton was granted the same day as Dunbar (the town that never existed, because the land for it already had been used for Sudbury). Hubbardton and Dunbar were Benning Wentworth’s last two grants for towns in what is now Vermont. Later that summer he made six small military grants, totaling less than half the usual town-sized allotments, in what was apparently an effort to discharge the last of the still unfulfilled promises New Hampshire had made about giving land to veterans of the French and Indian wars. One of these military grants was made to Robert Rogers, the Indian fighter and leader of Rogers’ Rangers.

By now the best land in the New Hampshire Grants was gone: over 50 percent of it had been granted in 1761, and another 30 percent in 1763. The land barons had had their day, and Wentworth was nearly seventy years old. Three years later his nephew, John Wentworth, would become governor of New Hampshire; and in another three years Benning himself would be dead, without having achieved what he most wanted: a title as a mark of His Majesty’s favor.

The town was named for the Honorable Thomas Hubbard, Esquire, a prosperous Boston merchant listed as a grantee in six other towns.

When Hubbardton was first surveyed, the proprietors found that there was not as much land as the charter called for, but it still was better off than Dunbar, for which there had been no available land at all. The land which fell to the Hubbardton grantees was hilly and rocky, with the result that the largest number of people in the town at any one time was 865, in 1830. Every census since then gives a smaller figure.

The only engagement of the American Revolution fought on what is now Vermont soil was the Battle of Hubbardton on July 17, 1777, between the British and the rear guard of American forces which had abandoned Fort Ticonderoga (taken from the British by Ethan Allen and the Green Mountain Boys two years earlier).

Goings-on in and near Hubbardton
Calendar of Events provided by the Vermont Department of Tourism & Marketing.

The Battle of Hubbardton, VT Revolutionary War Bullet in Display Case and COA