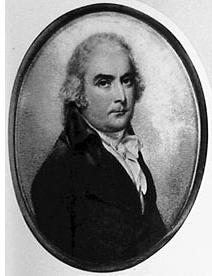 Ira was the youngest of six sons (his brother Ethanbeing the eldest) born to Joseph and Mary (Baker) Allen of Litchfield and Cornwall, Connecticut. Ira was born at Cornwall; he had a good education and became a skilled surveyor. In 1771 he went to Vermont as surveyor for the Onion River Land Company, which he and his brothers had established for buying lands in what was then known as the New Hampshire Grants. He soon became involved in the settlers’ dispute with New York over conflicting land claims, and was an early member of the Green Mountain Boys, along with Ethan, their cousin, Remember Baker, Thomas Chittenden, Seth Warnerand many other men now considered to have been Vermont’s founding fathers.

Throughout the Revolution and the early years of the Republic of Vermont, Ira was one of the foremost men in Vermont government, serving successively as a member of the Committee of Safety, the Governor and Council, then Treasurer and Surveyor General.

In 1796 Ira went to France to buy guns and ammunition, which, according to his contract, were “for the use of the militia of the state of Vermont.” The guns were loaded on the American ship Olive Branch, which was captured by the British and taken into Portsmouth, England, as a lawful prize, England and France at that time being at war. Improbable as it now seems, for eight years Ira battled the British courts for his guns, and not until 1804 was he able to establish the validity of his claims. It then was ruled that he must pay all his own court costs and those of his captors. The guns finally were transshipped to New York to be sold for him, but the consignees went bankrupt and the money they had gotten for the guns went to satisfy their creditors, not to Ira.

The enormous expense he had incurred in the gun fiasco and mismanagement of his Vermont property by the people to whom he had entrusted his affairs combined to bankrupt him. At one time he was jailed in Burlington for debt, and on his release he “jumped bail” and went to Philadelphia. Right up until his death in 1814, Ira had hoped to be able to straighten out the tangle of his finances and return to Vermont; but he died without achieving his objective and was buried in an unmarked grave at Philadelphia’s potter’s field (since relocated to a more appropriate resting place in Audubon, Pennsylvania).