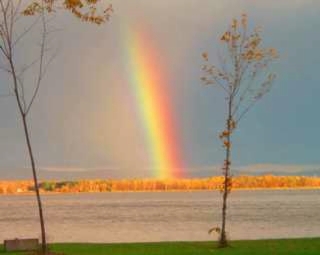 Originally, North Hero, South Hero and Grand Isle were granted to Ethan Allen, Samuel Herrick and 363 other Revolutionary War veterans as a single town known as Two Heroes. Hamilton Child’s 1883 Gazetteer of Franklin and Grand Isle Counties says the name referred to Ethan and Ira Allen. However, Ethan and Herrick are named first in the grant, while Ira is considerably down the list after Jonas Fay, Tom Chittenden and other founding fathers, many of whom were as respected as Ira.

In 1798, Two Heroes was divided into North Hero (the entire north island), Middle Hero and South Hero, the last two sharing the southern island and a single representative to the legislature, hence they were not actually separate towns. This arrangement was not entirely satisfactory: in 1810, Middle Hero was given complete autonomy and renamed Grand Isle, which is what the French had originally called the whole southern island.

Goings-on in and near North Hero
Calendar of Events provided by the Vermont Department of Tourism & Marketing.