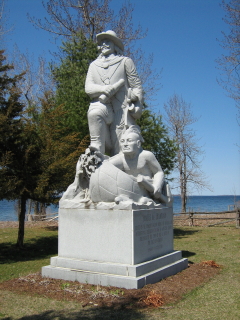 Originally called Isle of Mott in its charter, but very early the original French form of the name was adopted, and usage has given it authority. Some historians have said that Isle La Motte was chartered in conjunction with the Two Heroes (see North Hero, South Hero or Grand Isle), but the records of the Legislature and those of the Governor and Council show that there were two separate groups of petitioners, two grants and two charters for the two different tracts of land. The charter for Isle La Motte lists 96 names, headed by Benjamin Wait, who later settled Waitsfield. The Two Heroes went to 365 men, with Ethan Allen and Samuel Herrick at the head of that list. Some names appear in both charters, but fewer than might be expected in view of the fact that both were chartered exclusively to Vermont veterans of the Revolutionary War.

The island takes its name from the first white settlement within what is now Vermont. In 1666 the French built Fort Ste. Anne on the island as protection against the Indians. The fort was constructed under the supervision of Pierre de St. Paul, Sieur de la Motte and garrisoned by 300 troops of the Carignan Regiment, with la Motte in command. As the name indicates, a shrine dedicated to Saint Anne was on the site, and there the troops worshipped under the Jesuit priests who accompanied the regiment. After four years the troops were pulled back to Canada, the fort was destroyed by the French, and la Motte was made commander at Montreal; but historically his name has always been associated with the island. The Indians never forgot the shrine, and the Mohawk called the place Tgawistaniyonteh, meaning “there a bell is suspended.” Just before the turn of the 20th Century the Roman Catholic Diocese of Burlington acquired the site and constructed a new shrine to Saint Anne, which today is the single most popular reason to visit the island.

In 1802 the town’s name was changed from Isle La Motte to Vineyard. The official records give no indication of the rationale behind the change, but it must have been at the instigation of the townspeople themselves, because the legislature never made any arbitrary name-changes. Generally speaking, throughout the United States, the name Vineyard has been used in places that either had large numbers of grapes or wanted to be known as grape growing areas. Probably the former reason applied here, but Hamilton Child may have hit upon another reason in his Gazetteer, without even being aware of the significance of what he said, when he noted that “the people of the island are generally of English and Scottish descent.” That being the case, they may not have liked the French flavor of their town’s name. Whatever the reason, the change was not a permanent one: in 1830 the name was changed back to Isle La Motte.

The town’s first post office was established in 1829 as Vineyard and, in a quirk of history (but consistent with postal behavior), the name stuck until 1853, when finally it, too, was changed to Isle La Motte, 23 years after the official reversion of the town name.

The town’s only other post office was Fisk, which took its name from one of the oldest families on the island. Ichabod Fisk came to Isle La Motte in 1788 and settled in the southwestern part of town, where he developed the first marble quarry in the state. Fisk was involved in all the early activities of his town. He taught school for several terms and was a noted surveyor: in fact it was he who did the original survey for the allotment of the town. The post office of Fisk, opened in 1892 and closed in 1929, took its name directly from the first postmaster, Nelson W. Fisk.

During the decades around the turn of the 19th Century, Nelson Fisk was one of the county’s most prominent men. In addition to running quarries that supplied stone for many famous buildings throughout the eastern United States, he was the town’s representative to the Legislature. Later he served as a county senator, and was a delegate to the national Republican convention. In 1896 he was elected Lieutenant Governor of Vermont. It is said that he kept all the accounts of the quarries, the store and the post office in his head. Naturally, postal authorities took a dim view of Fisk’s accounting procedures. It was his practice to say “the post office is allowed to have $100 worth of stamps at any time, so here is a $100 bill in the drawer. Any time you want it you can take it, and the stamps are mine.” With the friends Fisk had in high places, postal authorities were helpless to make him change his ways. In fact, Vice President Theodore Roosevelt was staying at Nelson Fisk’s Isle La Motte home when word reached him that President McKinley had been shot.

Goings-on in and near Isle La Motte
Calendar of Events provided by the Vermont Department of Tourism & Marketing.

Chazy Fossil Reef
Adjacent to the Fisk home on the west shore near the southern tip of the island, the Fisk Quarry Preserve is the site of the Chazy Fossil Reef, considered by paleontologists to be the oldest coral reef in the world. It was formed during the Ordovician Period, some 450-480 million years ago in a shallow tropical sea (this part of North America was below the Equator at the time). Several ages of reef construction are visible in the various layers exposed by quarrying operations here over the years. Before quarrying ceased, the distinctive grey-black limestone was shipped all over the country; it was used to build the Brooklyn Bridge, Radio City Music Hall, and the National Gallery of Art.