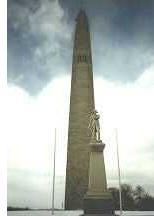 He came to Bennington in 1765, a skilled botanist (despite only a common-school education) and ardent huntsman. The lifestyle suited him, and these pursuits won out over farming.

He was elected Captain of the local regiment of the Green Mountain Boys, formed to resist New York authority over Vermont. Though he lived outside the settlement of Bennington only a mile from the New York line, the Yorkers never succeeded in capturing him despite numerous indictments and generous rewards offered.

His bravery and military capacity were highly respected in the Continental army.

During the 1775 invasion of Canada, the 300 men under Warner’s command repulsed Carlton’s force of 800 when they tried to join McLean to break the siege of Montreal.

In July, 1777, as the Constitutional meeting was being held in Windsor, Warner was ordered to abandon Ticonderoga and commanded the rear guard which fought a splendid, well-planned battle at Hubbardton, and which nearly won the battle had British reinforcements not arrived.

Warner aided John Stark in planning the Battle of Bennington and participated gallantly. Later, at Lake George Landing, he captured the vessels in which General Burgoyne would have escaped.

Never much of a businessman, he did not participate in the land speculation which made many of the early Vermont leaders wealthy. The proprietors of several towns voted him land as a reward for his services, but most of that property went to pay taxes; he never benefitted from it. Neglect of his affairs during his military career so depleted his resources that, as he neared death, his wife was forced to apply to Congress for charity, though it was hardly in a position at the time to grant anything. Some four years after Seth’s death (no explanation for the delay), the Legislature gave Hester just under 2,000 acres in the northeast corner of the state, now known as Warners Grant. It is not believed she ever occupied it, and today it remains unoccupied.

He returned to Roxbury in 1784, and died on December 26. Long bed-ridden, he was gripped by fits of insanity before he died.