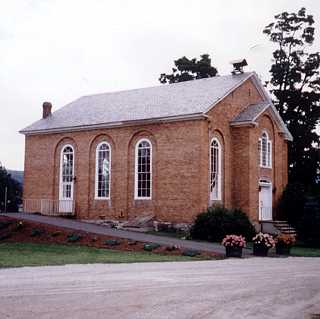 It has been said that Benning Wentworth named Leicester for Queen Elizabeth’s favorite, Robert Dudley, the Earl of Leicester. However, Dudley had been dead for nearly two centuries in Wentworth’s time, and there was no Earl of Leicester when this town was named.

It seems more probable that the Vermont town was named for Leicester in either Massachusetts or England. Some of the grantees came from Massachusetts where Leicester already was well established, named for the English town at the time of its incorporation in 1713. Leicester in England, already old in Norman times, was particularly well known as the place where Richard III spent the night before he was killed at the battle of Bosworth Field; his body was brought there for burial after the battle.

The main village is bisected by U.S. Route 7, going from Middlebury in the north to Brandon in the south.

In the extreme western section of town is the village which is now known as Leicester Junction, but which used to be Whiting Station, a confusing situation brought about by the railroad. The Rutland & Burlington line built a station at this place because it was about halfway between the principal villages of Whiting and Leicester. It was felt that, since Whiting had the larger population, the chief business would come from that town, so the station was called Whiting Station, despite it being located in Leicester. Postal authorities agreed with the idea and, when the Post Office was opened in 1863, it, too, was named Whiting Station. Some years later a short branch line of the railroad was built from Whiting Station to the shore of Lake Champlain, and another Whiting Station was built there, just south of the village of Whiting; the old Whiting Station and post office were renamed Leicester Junction in 1872. It is now the only post office in Leicester.

Goings-on in and near Leicester
Calendar of Events provided by the Vermont Department of Tourism & Marketing.