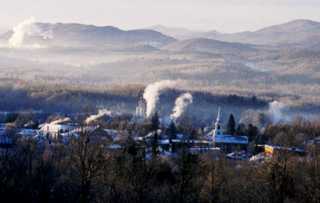 Brandon was originally chartered as Neshobe, after the birthplace of Captain Josiah Powers (first grantee listed among six members of the family), a section of Littleton, Massachusetts named for a tribe of Natives who lived near the ponds there. As it happens, the Algonquian word, meaning “full of water” or “between water” applies somewhat to this locale as well, with the Otter Creek and Neshobe River flowing through town, and several streams and ponds.

Early settlers apparently disliked the name and asked for it to be changed; the Legislature granted the request in 1784. As for the origin of its present name, Natives had burned the village during a 1777 raid, leading to the nickname “Burnt Town”, gradually evolving into “Brandon”. No substantiation has been presented to support that story; as well, there are a number of place names in England and Ireland consisting of or containing the word Brandon, any of which could have been the source.

Brandon is roughly midway between Middlebury and Rutland on US Route 7. A pleasant break in the trip, with stately old homes along broad avenues and a traditional village green.

Stephen A. Douglas was born in Brandon. Thomas Davenport was living in the village of Forest Dale when he patented the electric motor he had invented. James Conant manufactured the first stoves made in Vermont here: cast of iron which had been mined in the town, the “Conant Furnace” is now rare and a collector’s piece.

Goings-on in and near Brandon
Calendar of Events provided by the Vermont Department of Tourism & Marketing.

Covered Bridge (With Google Maps and satellite images):
Sanderson
Click Here for a map of all bridges in Rutland County.