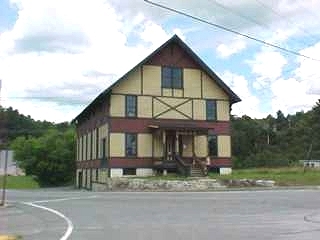 Granted as Minehead on the same day and to the same group of Connecticut residents as neighboring Averill, Lemington and Lewis. The original name is taken from the town of the same name in England, where many of the families of the grantees had originated.

At the request of townspeople, the name was changed by the Vermont legislature to Bloomfield in 1830. It is often said that the new name also commemorates Bloomfield, Connecticut, but this name predates that one by five years. Two other possibilities: a “made” name chosen for its descriptive connotations, or to honor Joseph Bloomfield, a major in the Revolutionary War and a brigadier general in the War of 1812, during which he commanded a batttalion at the Battle of Plattsburgh, an engagement in which many Vermonters took part.

The population and economy of Bloomfield has risen and fallen over the years. At its height, several hundred men were employed in lumbering and milling operations of the Nulhegan Lumber Company, which owned most of the land around a village then known as South Bloomfield; its location is now marked only by a cemetary. The only settlement to be found in the town today is at the junction of Vermont Routes 105 and 102, in the extreme southern corner.

Goings-on in and near Bloomfield
Calendar of Events provided by the Vermont Department of Tourism & Marketing.