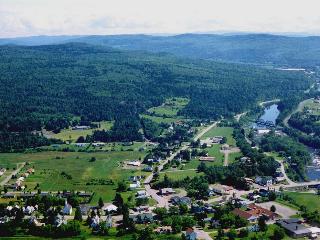 Canaan was chartered to a group of men from Connecticut and named for that state’s Canaan. During the peak of the 18th century’s religious fervor known as The Great Awakening, a score of Connecticut towns had been given biblical names, many of which were carried north to new towns in New Hampshire (Bethlehem, Hebron, Lebanon) and Vermont (Bethel, Goshen, Sharon).

Biblically, Canaan is the land the Lord promised to the Israelites: “I am come down…to bring them…unto a good land and a large, unto a land flowing with milk and honey; unto the place of the Canaanites”. Developers in both Connecticut and Vermont promoted their towns as desirably rich and fertile, in both cases the name more euphemistic than anything else: the former were barren and rocky, the latter heavily forested and mountainous.

The first US census (1791) recorded only 19 residents of Canaan. Ten years later, a new charter was issued, now including the former town of Norfolk, which had been chartered in 1782 and named also for a Connecticut town.