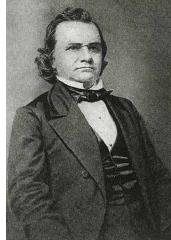 Lawyer and US statesman, born in Brandon.

He became Attorney General of Illinois in 1834, a member of the legislature in 1835, US Secretary of State in 1840, and Supreme Court Justice in 1841. He returned to Congress in 1843 and entered the US Senate in 1847. Abraham Lincoln, on the eve of his senatorial debate with Douglas in 1858, conceded that his opponent was “of world-wide renown” and regarded as a potential President.

On the question of slavery Douglas maintained that each territory should decide whether it should be free or slave, the whole thing a matter of “minding one’s own business.”

In 1860, he became the first presidential candidate to “stump” the nation (a term derived from the practice of standing on a handy tree stump to speak). In Burlington and Montpelier he implied that Vermonters would not be such extreme abolitionists if they had more frequent contact with Southerners. In both Middlebury and Brandon, he was recorded as saying that “Vermont is the most glorious spot on the face of the globe for a man to be born in — provided he emigrates when he is very young.”

Needless to say, his audiences were somewhat shocked. Here was the leading Demoratic contender, oddly having chosen to spend four days campaigning in the most Republican state in the Union, wryly commenting on the decimating westward migration from Vermont then taking place. Native son or not, it is perhaps no wonder that Lincoln carried every county in the state by large majorities.

Douglas died shortly after the election