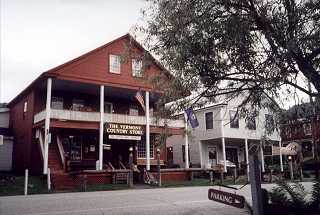 The present town of Weston was originally part of Andover, but the ridge created by Markham and Terrible Mountains made it impossible to get from one side of town to the other. When the Legislature created the new town, its name was obvious: that part of Andover had always been known as West Town.

The chief village is picturesque Weston, complete with bandstand on the village green. It is home to a number of shops, including the famous Vermont Country Store. There is a smaller hamlet in the southern tip of the town which has always been known as The Island: a settlement grew where a canal was cut across a bend in the West River to power a mill.

The West River rises in the north and flows southeast to join the Connecticut River at Brattleboro. There are still some maps which use the original Abenaki name Wantastiquet (“at the head” or “source of the river”), an appropriate name: in its 40-mile course it drops over 2,000 feet while draining some 430 square miles.

Goings-on in and near Weston
Calendar of Events provided by the Vermont Department of Tourism & Marketing.