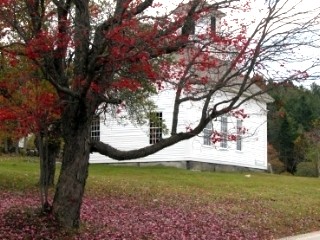 Landgrove is unusual in that it was chartered to people who already lived there. In 1769 William Utley, his son Asa, and their families settled in what they thought was the town of Bromley (now Peru). In time they discovered that they had settled in a gore of unchartered land between Bromley on the west and Weston and Londonderry on the east. Up to that time it had been assumed that Bromley abutted Weston and Londonderry.

This left the Utleys living in a no-man’s-land, so in 1780 twenty-two individuals (ten of them named Utley) petitioned for and were given about 6,000 acres. The shape of the town is unique: it resembles an upright hatchet, with the blade pointing due east to Weston and the handle standing between Peru and Londonderry.

Neither the settlers’ nor the legislature’s records give any indication of the origin of the name Landgrove. One can guess that is a “made” name, with the legislative action, which gave the title, suggesting “land,” and “grove” deriving from the trees which covered the land when the grantees first saw it.

Landgrove grew quite rapidly in the early years of the 19th Century, and reached its peak population of almost 400 people in 1830. By the 1930’s Landgrove seemed to be on its way to becoming a ghost town like Glastenbury, Somerset and some of the towns in the Northeast Kingdom (a term generally credited to the late George Aiken, former Vermont Governor and US Senator, describing the still very rural area comprised of Essex, Orleans and Caledonia counties in a 1949 speech. The name stuck). Largely through the efforts of one Samuel Ogden, new residents were attracted to the town, and it has been revitalized.

Goings-on in and near Landgrove
Calendar of Events provided by the Vermont Department of Tourism & Marketing.