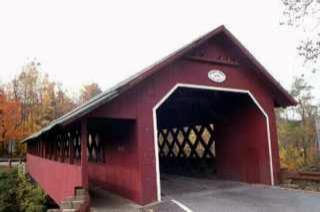 The French and Indian Wars prevented settlement of the original grant, and Benning Wentworth renewed the charter in 1760 and 1761. Originally Brattleborough, the town was named for the first grantee, Colonel William Brattle, Jr. of Boston, listed as a clerk in earlier records, later a member of the colonial militia. He is not known to have ever visited the town named after him, except perhaps to have become familiar with the area during various military forays through the area prior to the grant.

Throughout the remainder of the 18th century, the town’s population grew and flourished. A gristmill and sawmill were built on Whetstone Brook. A post office opened in 1784 at the Arms Tavern, the current site of the Retreat Farm. Because the town was on a stage coach route, the economy benefited from the trade of grain, lumber, turpentine, tallow and pork. Industry and commerce thrived during the 1800s as well. The Vermont Valley railroad ran directly through town, providing a vital link north.

It was in 1888 that Postal authorities decided that all towns ending with -borough should be shortened to -boro. Vermont went along with it.

In the 1840s, Brattleboro developed a reputation as a resort town. Pure springs were discovered along the Whetstone Brook. The Brattleboro Hydropathic Establishment, more commonly known as “The Water Cure”, opened in 1846. Wealthy patrons came from all over the world for treatments which included plunges in the cold springs, long walks in the woods and healthful food, sans alcohol or tobacco. The Water Cure operated until 1871.

Not long after the establishment of The Water Cure spa, the Estey Organ Company was founded. In its heyday, Estey marketed its reed organs as far away as New Zealand and employed more than 500 people; Brattleboro truly was the organ capital of America. The prosperity of the Estey family also spawned other enterprises in Brattleboro, including banks and a sewing machine company.

Estey is now but a memory (some of the factory buildings remain), but modern Brattleboro’s economy is healthy and growing, primarily because the town has diversified its industrial and commercial base. Numerous businesses provide stable employment.

Goings-on in and near Brattleboro
Calendar of Events provided by the Vermont Department of Tourism & Marketing.

Covered Bridge (With Google Maps and satellite images):
Creamery
Click Here for a map of all bridges in Windham County.