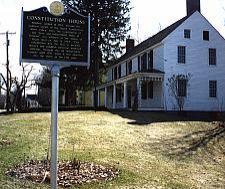 Windsor had become the political center of the Upper Connecticut River Valley, when, on July 2, 1777, seventy-two delegates gathered at Elijah West’s tavern.

Shortly after convening, the convention nearly disbanded as word came that the British had captured forts at Ticonderoga, New York and Mount Independence in Orwell, Vermont. The Battle of Hubbardton followed on July 7.

According to local folklore, a violent thunderstorm delayed the delegates’ departure long enough that a constitution of the “Free and Independant Republic of Vermont” could be adopted on July 8. The Republic existed for 14 years, before being admitted to the Union as the 14th State.

The building in which all this took place, known as The Old Constitution House (shown above), is open to the public. There is a small admission fee for adults; children under 14 are admitted free.

Goings-on in and near Windsor
Calendar of Events provided by the Vermont Department of Tourism & Marketing.

Covered Bridge (With Google Maps and satellite images):
Windsor-Cornish
Click Here for a map of all bridges in Windsor County