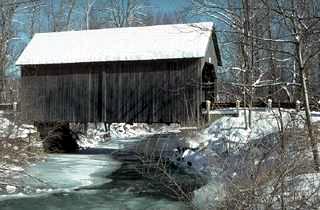 Townspeople must have been interested in dividing the town almost from the time of its first settlement. In 1793, the Legislature created two “parishes” within Windsor, and in 1814 made the parishes separate entities each with representation in the Legislature. Second thoughts prevailed the following year when the two were reunited. The two were again separated in 1848, with West Windsor getting more than half the acreage and about a third of the population.

By the time of the last division the village of West Windsor had been renamed as Brownsville in honor of the families of Briant and John Brown, already heads of large households in West Windsor in the 1791 Census. No settlement has since been known as West Windsor.

Goings-on in and near West Windsor
Calendar of Events provided by the Vermont Department of Tourism & Marketing.

Covered Bridges (With Google Maps and satellite images):
Bests Bowers
Click Here for a map of all bridges in Windsor County.