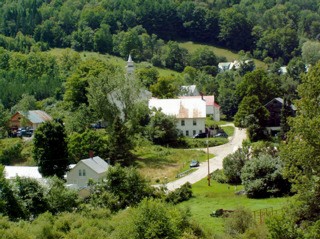 One of only three places in the world with this name; in all three, the pronunciation is with the accent on the first syllable (TOP-sum).

Locally, it is said that the name comes from Topsham, Maine, and this appears to be borne out by the fact that some of the first settlers came from there. Unquestionably, they had bought their land from the original grantees, who were either friends or neighbors. Maine’s Topsham was settled in 1730, and most probably named for Topsham, Devonshire, England.

Goings-on in and near Topsham
Calendar of Events provided by the Vermont Department of Tourism & Marketing.

77909. Turkey Farm Mrs Guplett Topsham Maine ME she watches over her flock