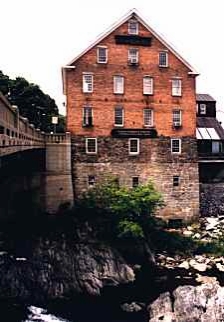 Referred to as Waitstown and Waits River Town before its original patent as Mooretown, Bradford is unique in Vermont (so far as has been determined to date) in that it was settled before any grant, charter or patent existed to cover the land.

This anomaly is likely due ultimately to the king’s vacillations over which colony had the right to dispose of land in present-day Vermont, and entirely possible that the settlers went there believing they would receive a New Hampshire Grant just as Benning Wentworth stopped issuing them. Deciding they had a better chance of getting a New York Patent than a New Hampshire Grant, the settlers were either well advised or lucky in the man they choose to represent them, a New York lawyer by the name of William Smith. In any case, the patent was issued (and quickly, due to Smith’s influence). The name Mooretown is after Sir Henry Moore, the Royal Governor of New York.

The Waitstown/Waits River Town names derive from Joseph Wait, whose brother Benjamin founded Waitsfield. Joseph had taken part in the 1759 Rogers’ Rangers raid against the St. Francis Indians in Canada, and was with the group that returned, starving, by way of the Connecticut River. Wait is reputed to have shot a deer and marked the spot by carving his name in a tree beside the river which has since been known as Waits River.

After the Revolution, the residents of Mooretown decided they no longer wanted the name to remind them of a royal governor, so they petitioned the Vermont Legislature to rename it Bradford, oddly after another Colonial Governor. But, where Henry Moore’s involvement had been a matter of political patronage, William Bradford’s was one of trust: he had been electedgovernor of the Plymouth colony 31 times. Coincidentally, but with no discernible connection, just a year earlier, New Hampshire created a town named Bradford out of its Newbury, which Vermont town also abuts Bradford.

A rather inventive farmer by the name of James Wilson designed and manufactured the first practical world globes here.

Goings-on in and near Bradford
Calendar of Events provided by the Vermont Department of Tourism & Marketing.

Old Church Community Theater
…over 20 years of summer productions geared for family entertainment. The actors are local residents from various backgrounds; some have gone on to make a career in the theater world. The theater is open to anyone wishing to act, direct, work backstage, help with set design, ticket sales and more!