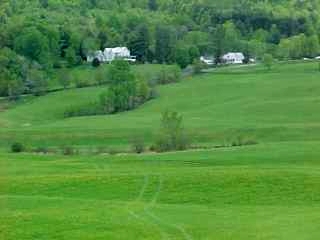 A group of men from Hanover, New Hampshire formed a company to purchase a town in Vermont, and set about locating the owners of a tract originally patented by New York as Middlesex (covering parts of present-day Randolph and Bethel). One of the group, having searched all over New York and New Jersey, reported that the patent holders could not be found. The group then applied to Vermont for a charter and it was granted.

Vermont was making every effort to have Congress accept her into the Union, thus it is easy to see that the name honors Edmund Randolph, briefly an aide to Washington, then one of Virginia’s delegates to the Constitutional Congress. He ultimately declined to sign the Constitution, not believing it republican enough, but favored Virginia’s ratification of the document for the sake of political expediency. Just five weeks after this town was chartered, Congress appointed a committee of five to confer with a committee from the New Hampshire Grants (Vermont) regarding the question of admitting Vermont to the Union. Edmund Randolph was one of the five men appointed to the Congressional Committee. It would be another ten years before Vermont became the fourteenth state, but in the summer of 1781, it certainly must have looked like the goal was in sight.

Goings-on in and near Randolph
Calendar of Events provided by the Vermont Department of Tourism & Marketing.

Covered Bridges (With Google Maps and satellite images):
Braley Gifford Hyde
Click Here for a map of all bridges in Orange County.