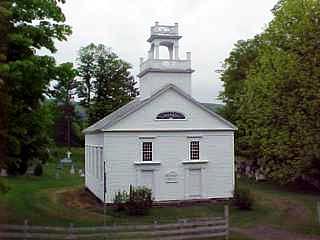 The first town created by the independent Republic of Vermont.

Dudley Chase, one of the grantees, while surveying the town with his associates, awoke one morning and told of having dreamed of the Biblical story in which Jacob slept in a field with only a stone for a pillow (Genesis 28:11-22). Jacob had declared that stone to mark the place of God’s house and named the place Bethel. Chase’s associates were so impressed by the dream that they agreed to name their town the same. When the Baptist Church was built in 1824 in the village of East Bethel (the area where Chase’s group had been camped), stones from the site were gathered and incorporated into the foundation.

Goings-on in and near Bethel
Calendar of Events provided by the Vermont Department of Tourism & Marketing.

BETHEL CT - The South Street School From Above Bethel