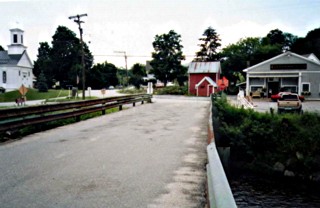 The most common and quite understandable assumption is that the town is named for the sixteenth US President. However, “Honest Abe” wasn’t even born until almost thirty years after the town was named.

Lincoln was chartered to Colonel Benjamin Simonds and 64 associates. The Colonel was well thought of in Vermont because of the assistance he and the Massachusetts militia had rendered at the Battle of Bennington three years earlier.

Colonel Simonds’ new town was named in honor of his commanding officer, Major General Benjamin Lincoln (1733-1810), who had played a vital role in getting the militia to Vermont. General Lincoln is also credited with having prepared the way for the American victory at Saratoga by cutting Burgoyne’s lines of communication with Canada.

Vermont seems to have made an especially nice gesture when it honored General Lincoln in the autumn of 1780. The tide of the Revolution had moved south; the General’s troops had failed to retake Savannah, and they had lost Charleston in the spring of 1779. General Lincoln was captured and exchanged, and in 1780 he was serving under General Washington in the New York area.

Although relatively little known today, Lincoln was respected and liked by his contemporaries. Like Washington, he was a farmer, and after the war he returned to farming at his Hingham, Massachusetts home, though he was called into service several more times before his death. He was Secretary of War from 1781 to 1783; he led the Massachusetts militia in putting down Shays’ Rebellion; he was asked to, and did, run in opposition to General Washington in the first Presidential election; he was lieutenant governor of Massachusetts in 1788, and was collector of the port of Boston from 1789 until just before he died at the age of seventy-seven.

Like several other Addison County towns, Lincoln was settled by members of the Society of Friends, or Quakers. The first Quakers settled in an area known as Mud Flat about 1795. As time went by and other Quakers joined the original group, the area became known as Quaker Stand. The meeting house is gone and the Society has dispersed, but one part of Lincoln village is still called Quaker Street.

Goings-on in and near Lincoln
Calendar of Events provided by the Vermont Department of Tourism & Marketing.