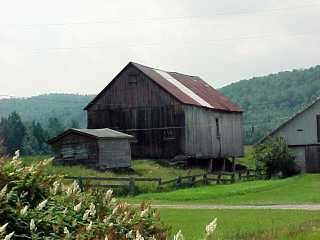 One of the many towns granted to Samuel Averill of Connecticut (see also Averill); spelled Limington in its charter, and the present spelling was adopted early on. The origin of the name is uncertain: there is no other place in the world with exactly that same original spelling. In the absence of other evidence (and given that colonial spelling conventions were virtually nonexistent), it is reasonable to say that either Leamington Spa, Warwick or Lemington, Newcastle could have provided the original name.

Except for the fertile intervale lands along the Connecticut River, there has never been much settlement, the population never greatly exceeding 200.

Goings-on in and near Lemington
Calendar of Events provided by the Vermont Department of Tourism & Marketing.

Covered Bridge (With Google Maps and satellite images):
Columbia
Click Here for a map of all bridges in Essex County.